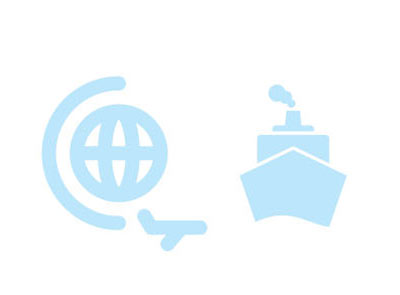 TRAVEL FROM & TO LEMNOS

Check the connections from Lemnos to Athens, Thessaloniki, Kavala and to the main islands of the Aegean Sea.

We can help you out with booking your ferry tickets. After deciding the itineraries you want to take, you may let us know by email. We will inform you about the total cost and the payment options (bank transfer, credit card, PayPal, Revolut). As soon as you proceed with the payment, we will send you the ferry tickets in both web and mobile form.

Please contact us and find the best way to visit our beautiful Island. Following you can find both the flight and the ferry schedule for Summer 2018: 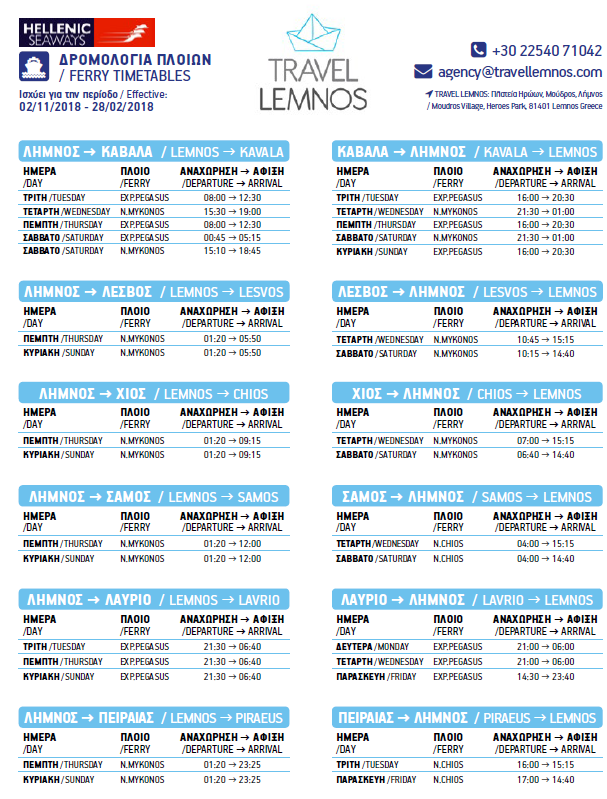 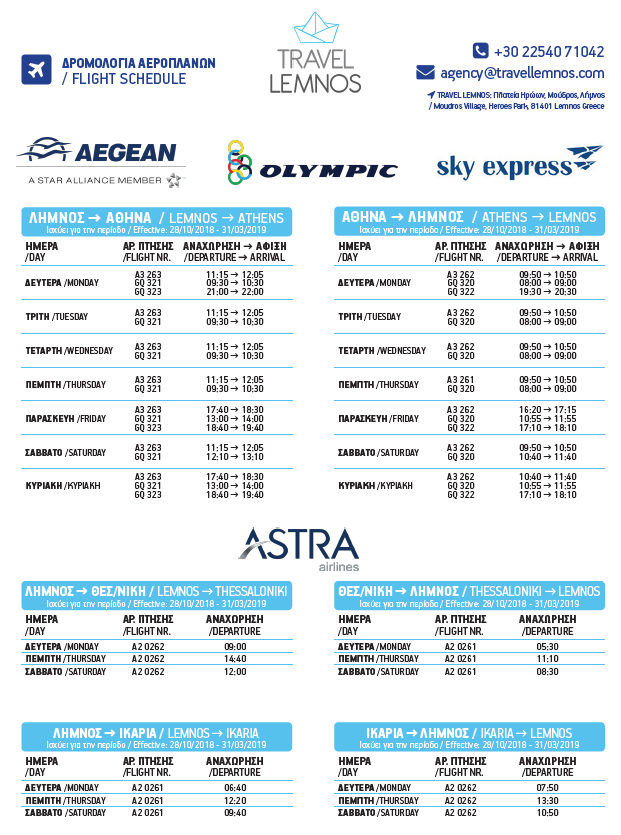 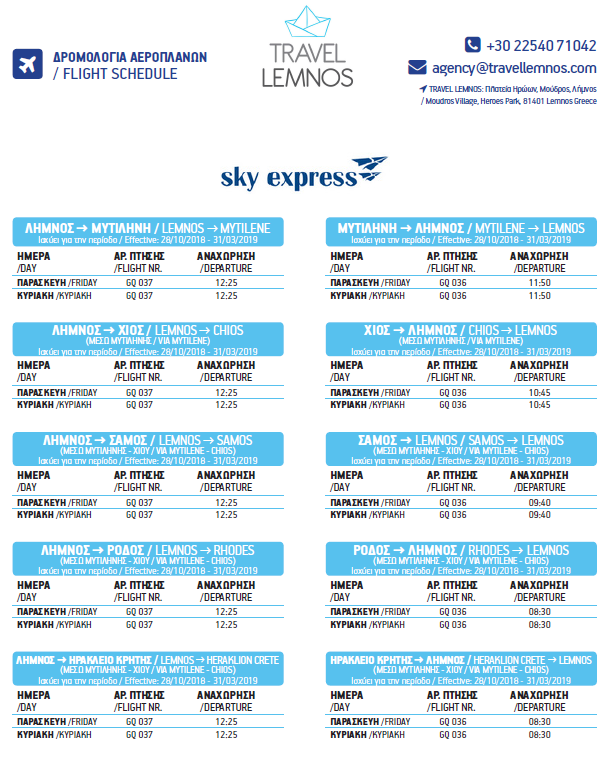 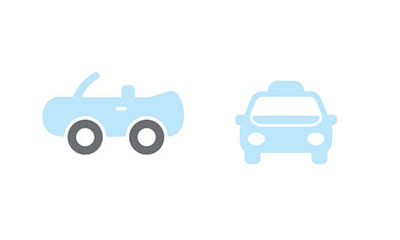 GO AROUND THE ISLAND

Find the best way for you to discover the island. Rent a car, call a taxi, take public transportation or rent your private 8-seat van for your company or family.

Call us or send us an email and we will find the best solution for you.

There is a sufficient fleet of 27 taxis, with clean and comfortable vehicles. Call us or send us a request by email to arrange one for your transfer.

Use the local bus

There is a simple daily bus connection between the villages.

Book your private transfer with our 8-seat van. We offer transfer services with an experienced driver. Ask for prices and get a discount if you are already our customer. 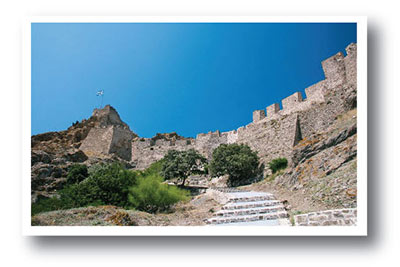 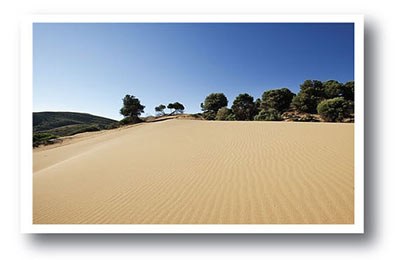 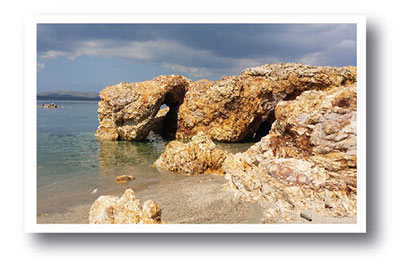 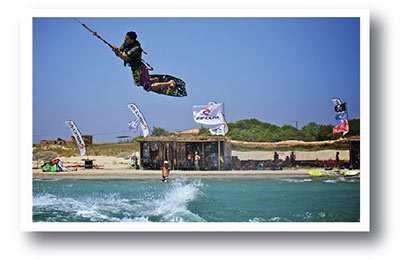 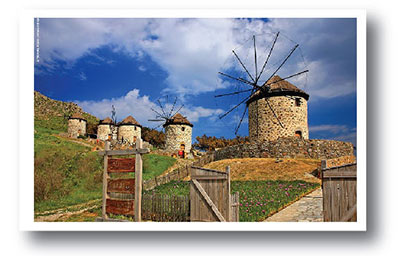 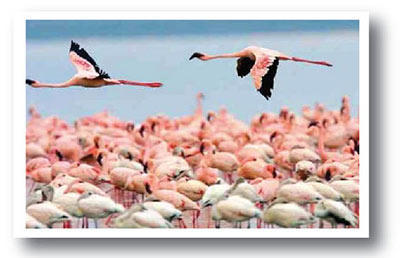 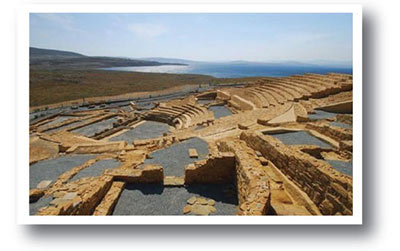 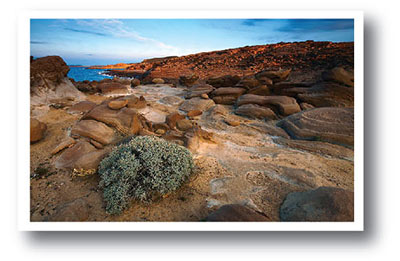 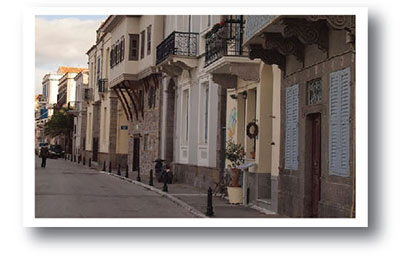 Learn some things about the history of Lemnos. Read our top 10 things to do or see on the island and you are one step closer to Lemnos.

1. The Castle of Myrina

The impressive castle of Myrina, one of the best-preserved castles in the Aegean, covers an area of 14,4 hectares on a peninsula west of the capital of the island. Inside the walls, there are cisterns, remains of houses and an underground vaulted room. Today, this castle is uninhabited, but it is the refuge of some 200 deer. The locals provide them with food and water.

On the north part of the island, on the hillsides of Katalakkos village lies an area of uncommon beauty. Dunes of fine sand, which alongside the scattered brushwoods recall the charm of the desert at the north of the Aegean Sea. Expanding over an area of 17.5 acres, they create a magnificent landscape that is unique in Greece.

Lemnos is a beautiful island with superb unspoiled beaches. There are numerous sandy, uncrowded beaches which are among the best in the Aegean Sea, spread all over the island. Lemnos beaches have crystal-clear waters and soft sands. The most popular and organized beaches in Lemnos are located on the western side of the island and include Plati, Romaikos Gialos, Riha Nera and Agios Ioannis. Lemnos beaches on the eastern side are more secluded and provide the best spots for windsurfing, particularly the beaches of Keros and Zematas.

Keros is a super safe sandy kitesurfing bay with a variety of conditions, suitable for all. The whole set up is within a protected ecosystem where you can spot wildlife such as rabbits, flamingos and rare species of flora. Here you can experience the real Greece as it was 30 – 40 years ago before mass-tourism, with friendly people, good food, tradition, and originality…

Panagia Kakaviotissa is a chapel built around 1300, in an inaccessible cave, at the top of the mountain Kakavos and among imposing cliffs. It is the only roofless church in the world, which is built inside a cave as a hideaway and remains a place of absolute tranquility and of unique sensation.

Kontias is a picturesque village, built over the wooded hill of Saint Athanasios and it has to show wonderful houses of urban architecture, which preserves solid its traditional color, with marble stairs, marvelous wooden doors, sweet-smelling gardens, and great balconies. The road at the entrance to the village is decorated with an exquisite line of gigantic plane-trees. The traces of a prehistoric settlement, but also Vryokastro, a medieval castle, fill the bill for you who want to discover the historical past of this place.

One of the most important wetlands of the Aegean is found on the eastern part of Lemnos. The wetland expanding over an area of approximately 18.000 acres, is comprised of a cluster of three lakes, Chortarolimni, Asprolimni and Aliki, and the wider area around them. The biotope which they constitute is an exceptional example of wild nature with minimum human intervention. The region is not just of great scientific interest; but also offers a unique aesthetic experience.

The Communal Store and Assembly Hall (parliament), discovered by the archaeological mattock at Poliochni, prove that Lemnos was the first to introduce institutions of joint governing in Aegean and in the world generally. Additionally, 12 more prehistoric settlements, traces of which were found in the island, the city of Hephaestia, the sanctuary of Cabeiri, the Byzantine Kotsinas, the archaeological findings of archaic, classical, Hellenistic, Roman and medieval years, and also the remains of monasteries and dependencies of Mount Athos, reveal a civilization of total duration of 6,000 years approximately.

At the north part of the island at the Cape of Falakro, a beautiful geographical phenomenon reveals the geographic history of Lemnos and creates some superb imagery. Millions of years ago, hot volcanic lava flooded out of the depths of the earth and froze to crystal as soon as it came to contact with the sea waters. Impressive natural sculptures arose as a result, of it. The dozens of shades of yellow frozen lava and the spherical geological formations, next to the picturesque coves of the sea, are worth a visit.

Romeikos Gialos area is declared as well-preserved and is the noblest of Myrina. Its mansions, built nearby the sea and in the shade of the castle, imperial and of neoclassic style, bear vividly the colonial history, while these were built a century ago approximately, by rich people of Lemnos, who were settled and excelled in Egypt. You should also know that this location, beyond its historical uniqueness, constitutes the most modern meeting point of the island and it really takes off the special lifestyle of Lemnos. Enjoy it without any hesitation!